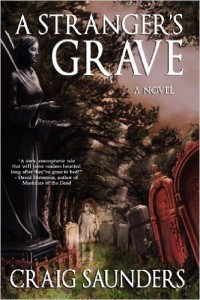 I’ve said before that Craig Saunders writing style fits succinctly with my inner core and A Strangers Grave is definitely one of my favourites.

Elton Burlock is out of prison after a long 26 year stretch for murder, longer than it should have been but that’s something at the heart of his story, along with the reason he went to jail. You would think a murderer an evil man but Elton is far from that, he’s an old man now just surviving.

The only job Elton can get is the keeper of an old graveyard in a small Norfolk market town, the first headstones were laid in 1756 but something much older came in 2007. A trio of angels carved in basalt and polished to a black sheen, the evil those angels bought was older than anything.

And when the first murder occurs, who is the obvious suspect?

‘But he screamed, then, because as he came she came, the old one, and she drove splinters into his spine and tore out handfuls of his lungs until he could scream no more, snapped his neck, broke his skull, tore into his brain, her worm-ridden tongue licking and licking and eating his eyeballs from behind.’

So there’s death in the graveyard, the odd ghost with evil intent, still-born children buried in a strangers grave, a grave that can never be too deep and some laughs around two fat coppers.

‘They both set to running as fast as two fat coppers can in a dark cemetery if they don’t want a broken neck or a coronary, because of intuition, but also because both policeman knew that whatever happened next, neither one wanted to get to the screamer alone.’

From reading Craig Saunders work you can tell he doesn’t waste much time on masses of research, the writing flows effortlessly from darkness to humour in the blink of an eye and I’ve got visions of him chuckling away in his legendary shed, maybe it’s got a little bar and pool table for relaxing. But at the end of the day I really enjoyed A Strangers Grave, the protagonist carries enough baggage to make for an arresting character coupled with a disturbingly creepy setting and a quite wicked story. Craig Saunders does it again.