A SONG OF SHADOWS: Book Review 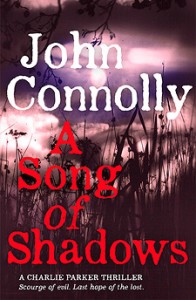 A Song of Shadows is the thirteenth in the Charlie Parker series which has long been my favourite and a new release is in my eyes a prominent day in any literary calendar.

Now the series as a whole generally comes down to two types of books, you have the ones that bounce ahead in Charlie’s story arc and you have the ones that step sideways, usually a highly entertaining break but doesn’t really progress toward where we all want to get to. More recently The Burning Soul and The Whisperers spring to mind.

So which does A Song of Shadows fit into, well I’d have to say for the main part it’s a step sideways but there’s a couple of extremely significant events regarding Charlie’s family, specifically his daughters. Yes both of them, the start of an absolutely chilling relationship that adds another major plot line, not that this series is in dire need of more darkness and shadow but its more intrigue on top of everything else. Past friends like Epstein the rabbi and his beautiful guardian, The Collector and Cambion the Leper all make brief but substantial appearances, it’s all here and those players are not even the primary source of danger.

The story well it’s all about recovery and rehabilitation as Charlie fights to get back to his former self after the injuries sustained in the last outing. He picks Boreas to anchor down in and Charlie is of course a gravitational pull to all that is dark and evil in this world and that’s what makes him immensely popular with anyone able to pass breath and delve into his completely enslaving life. It’s not all darkness, of course there is the usual humour around the Fulci’s, Angel and Louis all mixed with considerable menace. Take the slow driving Louis and the exasperated Angel.

‘You want me to get out and walk in front with a red flag?’ ‘Yeah, would you? Then I could run you over.’ ‘You couldn’t accelerate fast enough to run me over. By the time you got up to speed, I’d have died of old age.’

Charlie befriends a widow in the house next door and a new case practically jumps out of the closet at him, one with its origins going all the way back to the Second World War and the atrocities surrounding a particularly horrific concentration camp. This did result in excessive information dumps about the Nazi’s, their ill-gotten gains and fight to stay hidden under the radar, which diverted focus away from where you really want to be. You can easily live with that, however because the stories are exceptional.

This is all about Charlie and his daughters though, an excitingly dark twist to his future, tense, fraught with trepidation, and hats off to the direction John Connolly’s now taking us in. Dark and Malevolent as ever but the ghosts of his past combine furtively with the things most precious in his life and its gripping.

‘The detective’s relationship with his daughter was a construct of great complexity, of nuance and shadow. He could never see as much of her as he might have wished, and yet curiously he did not miss her as deeply as he might have done under other circumstances, for she was always with him. In that, he thought, she was like his first daughter, his dead daughter.’

Looking forward to the next already, hopefully this series never ends because it is that good and the last five lines just blew me away, absolutely chilling. I could easily give every book of this series five stars but in terms of enjoyment and the fact that the last two books were top draw this one I think is almost a reluctant four.