A Slick Trailer Arrives for Diggers

If you like your horror films claustrophobic and set underground, then you should enjoy this slick trailer for the Russian film Diggers. The film follows a group of people who are tasked with finding their missing friends in a set of train tunnels. That alone is something we’d have to pass on. Nothing seems worse than wandering empty, dark tunnels, let alone if a ton of people had just gone missing down there. No, thank you! 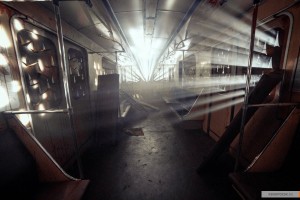 When the last train of the night blows through the station and disappears deep into the tunnel system beneath Moscow rather than stopping and releasing its passengers, and when authorities successfully stifle all talk of the disappeared train and passengers, it falls to a group of young people to work their way into the tunnel system to try and discover what has happened to their friends. And while I have no idea if they succeed in finding what they went in looking for, they certainly find something.

It looks and sounds like 2004’s Creep, The Descent and The Hills Have Eyes with its mixture of confined space and unknown (possibly cannibal?) assailants. The editing and soundtrack are super stylish and paint Diggers as a must-see.

Diggers comes from director Tikhon Kornev and has a release date set for 2016.