A Sinister Synopsis and Teaser Trailer for Evolution Have Been Released 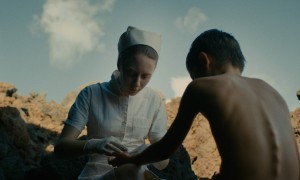 An extremely teasing teaser trailer and a detailed synopsis for the fantasy-horror Evolution have been revealed. We warn you, the trailer lets you know zilch about the plot of the film, but if you read the synopsis it will give you a more in-depth idea about the story. It’s quite chilling.

Synopsis:
A young boy living in a mysterious, isolated seaside clinic uncovers the sinister purposes of his keepers, in this exquisitely shot blend of body horror and surreal fantasy from director Lucile Hadzihalilovic.

Ten-year old Nicolas lives an austere and isolated life with his mother in a remote seaside community populated by women and other little boys about his age, but seemingly devoid of adult males. In a hospital overlooking the tempestuous ocean, the boys are all subjected to regular medical treatments – or, perhaps, some mysterious experiment. Only Nicolas seems to question what’s happening to him and his friends.

He finds an unexpected ally in a young nurse, Stella, whose kindness is a break from the severity that all the other women seem to reserve for their young charges. Increasingly suspicious that his mother and the nurses are lying to him and that something ominous is going on, he follows the women at night, determined to find out what they are up to. What he discovers on the beach signals the beginning of a nightmare from which he’s helpless to escape.

Even without reading the synopsis, there is something quite ominous about Nicolas emerging from the sea to a group of women and young boys. I’m definitely intrigued to know what’s going on, so the teaser trailer has succeeded at sparking my curiosity.

You can catch Evolution when it screens at the London Film Festival on 12th October 2015.