A Routine Job Takes The Plunge in the Trailer for Submerged 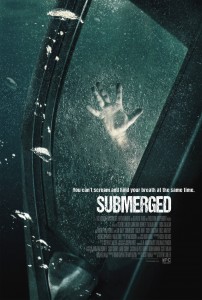 Claustrophobic settings can be hit or miss in the world of film, with many films succeeding to exploit the feeling of being trapped and the inability to escape very well, and others, not so much. Panic Room, Buried and The Descent are great examples of films that have created tense and exciting features with a very small space. Others like Devil and As Above, So Below, failed to ramp up the pressure and fell a little flat at the finish line.

Submerged is now tackling the tight spot as it sees a group of people trapped in a limousine under water. We’re imagining something a bit like Poseidon meets a home-invasion film as the submerged group find themselves still under attack from the gang who ran them off the road. They really are a persistent group; it seems lucky – and strange – that they have diving gear handy for moments just like this.

Synopsis:
A limousine joyride goes berserk in this breathless, pulse-pounding thriller. Jonathan Bennett stars as an ex-soldier turned bodyguard hired to protect a young woman. But while cruising with a group of friends one night, their stretch limo is run off the road and underwater by a gang of ruthless kidnappers – who then dive in to finish the job. Suddenly it’s sink or swim, as the bodyguard must fight to keep the vehicle from becoming a watery grave.

Submerged comes from director Steven C. Miller (Under the Bed) and will be released in the USA on 27th November 2015.