A New Clip from Martyrs Brings the Pain 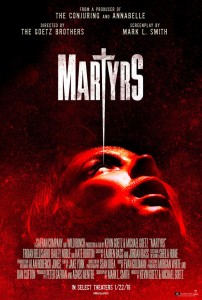 A new clip has been released from the upcoming remake of the French shocker Martyrs and it gives us a look at the pain, teasing us with the film’s potential for brutality. Lucie is trapped in the basement of a home that hides behind a façade of normality and we know the horrors that are about to be unleashed upon her.

The film has, so far, been released to mediocre approval, which is actually quite surprising. Everyone was probably getting ready to dismiss this remake entirely, but apparently it’s not that bad… Only the film’s release in February will tell us, however.

Synopsis:
Ten-year-old Lucie flees from the isolated warehouse where she has been held prisoner. Deeply traumatised, she is plagued by awful night terrors at the orphanage that takes her in. Her only comfort comes from Anna, a girl her own age. Nearly a decade later and still haunted by demons, Lucie finally tracks down the family that tortured her. As she and Anna move closer to the agonising truth, they find themselves trapped in a nightmare – if they cannot escape, a martyr’s fate awaits them…

Martyrs has been directed by the Goetz brothers (Scenic Route) and will receive a limited theatrical release on 22nd January, with a VOD, DVD and Blu-ray release on 2nd February.