A MOST WANTED MAN: FILM REVIEW 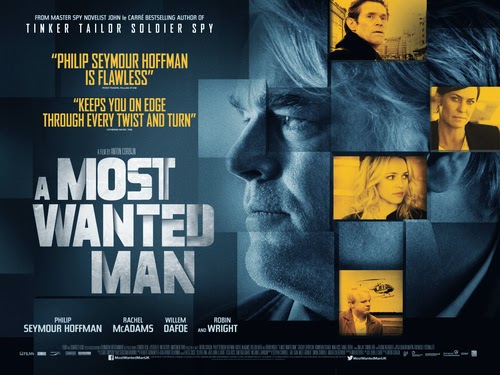 A MOST WANTED MAN

Synopsis:
To catch a shark you need bait!

The swivel eyed loons that are conspiracy theorists would have it that film studios are manipulating the world’s media. ‘Is it a coincidence’, they will say, ‘that hackers have got into the accounts of alleged celebrities icloud accounts just as the film ‘Sex Tape’ is released?’ ‘Is it a coincidence that the threat level from terrorism has been raised just before the latest terrorist film, ‘A Most Wanted Man’ is released?’ Clearly the answer is, Yes. I must have missed the story earlier this year when a giant lizard was stomping all over downtown Tokyo just before the latest Godzilla movie was released.

So with Phillip Seymour Hoffman dead from drugs we’re being drip fed the last of his completed films with this the latest adaptation of a John Le Carre novel. As the chain smoking Gunther Bachman he leads a small covert and secretive German police department searching for possible moles to infiltrate Islamic terrorist groups when they chance upon an illegal immigrant who appears to have swum to Hamburg. Downcast & fearful of deportation he is taken under the wing of a well meaning Muslim couple who in turn put him in touch with a young immigration solicitor where he reveals that he is line for a huge yet unwanted inheritance payout. It’s from here that PSH and his team use him as bait to catch a Muslim apologist who, whilst publicly promoting Islam, is secretly funding jihadists.

The plot is typically La Carre with it labyrinthine plotting and consequently not the type of film where you can afford to be leaving the auditorium to go for a toilet break or buy another dustbin of popcorn without missing chunks of exposition. As with all his characters each has an ulterior motive whether it be PSH wanting to make an amends for a tragic error in his career or a liberal solicitor taking cases merely to wind up her father: a high court judge though in an outspoken outburst PSH tells her, ‘You’re a social worker for terrorists!’ But it’s clear that no one can be trusted and few are what they appear to be.

With subdued performances, subdued lighting, subdued production design it all contributes to director Anton Corbijn’s typically subdued style which keeps focus on the mesmerizingly complex plotting. Though the film is based in Hamburg it’s only PSH who attempts successfully to try out the foreign accent skill and serves to remind us that of his generation he was a towering talent.

Win A Copy Of THE FEAR On DVD

A WALK AMONGST THE TOMBS: FILM REVIEW
Share this...