A Man In The Dark Reunites Sam Raimi & Fede Alvarez 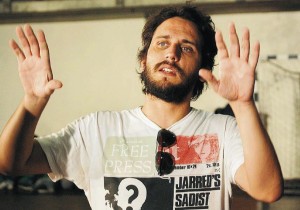 Ever since director Fede Alvarez’ Evil Dead remake raked in almost US$ 100 million worldwide, expectations have been rife that work on a sequel would begin swiftly. Based on today’s announcement the future of said sequel is looking bleak.

Ghost House Pictures has announced that the thriller, A Man in the Dark, penned by Fede Alvarez and his Evil Dead co-writer Rodo Sayagues, will be produced by Sam Raimi and Rob Tapert who we know have also been working on their own sequel to Army of Darkness.  A Man in the Dark follows three teenagers who live life on the edge, getting away with perfectly planned home robberies, until now. To leave this life of crime behind they set their sights on a reclusive blind man who has millions of dollars stashed away. Whilst the heist sounds simple, as soon as they infiltrate the house everything turns on its head as they find themselves trapped and fighting for their lives against a psychopath with the darkest of secrets.

So what could this mean for the Evil Dead 2 film? All we can do is play a guessing game but Alvarez has hinted on various occasions that the Evil Dead sequel screenplay was proving tougher than he had hoped. This would suggest that A Man in the Dark could be a project to tide things over until he comes up with a meatier Evil Dead plot or maybe he has given up entirely on a sequel. We’re hoping it’s the former of course as his reworking of Raimi’s original is without a doubt one of the better reboots/revamps of late.

What we do know is that Alvarez will be back behind the camera for A Man in the Dark, and other than Raimi and Tapert producing, J.R. Young (The Messengers), Nathan Kahane (Drag Me To Hell) and Joe Drake (Evil Dead [2013]) are all on board as exec. producers. Good Universe is all ready to take the film to the upcoming American Film Market and hopefully we’ll be able to report both a U.S. and U.K. release date soon.