A Man Dreams the Future in the Trailer for Extinction 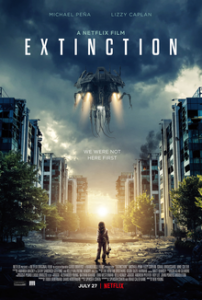 I love films that blur the line between reality and fantasy, where it’s never clear if something is real or in the mind of the psychologically troubled protagonist. Extinction looks like an excellent feature that is going to explore an imminent alien invasion that lies in the mind of Peter (Michael Pena). It has touches of dramatic sci-fi, but also reminds me of the Michael Shannon-starrer Take Shelter from director Jeff Nichols.

Check out the trailer below; it’s explosive and startling, teasing the onset of a human extinction when otherworldly creatures start an aggressive attack.