A IS FOR ANTICHRIST: Book Review 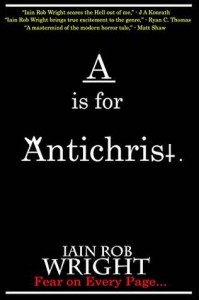 Isaac’s parents have gone out, left him to it, after all, it’s his 16th birthday and he’s invited everyone to his house for a party. Only his close friends have bothered to turn up though and this is fast becoming a disaster. Inexplicably the lemonade bottle is full of vodka and things are looking up, time for some prank phone calls, come on we’ve all been there.

First up a call to the Chinese takeaway to order an Indian meal, ok not very funny but everyone’s laughing, it’s a party. Next up Barbara and a call to the local law firm asking for advice about her brothers skid marks, she hasn’t got a brother and this cracks everyone up. Is it just me or is this not funny and should you expect to reach a law firm after seven in the evening, I think not. This coupled with some cringe worthy dialogue had me thinking, it’s a good job this is a short story because I’m losing the will.

A dice game follows and Isaac is continually rolling three sixes, interest starts to develop and the story actually gets quite creepy as our host discovers he has some pretty nifty abilities.

Iain Rob Wright is working his way through the alphabet with short tales of terror, B is for Bogeywoman, C is for Clown, you get the general idea and currently up to F is for Feral. A is for Antichrist started off I have to say pretty badly but rescued itself and ended up turning into a menacing short story.