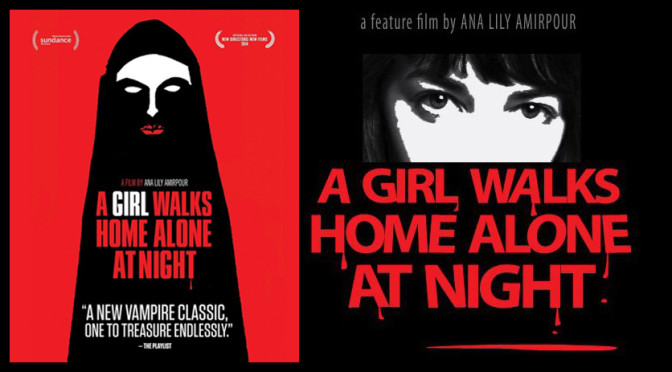 Synopsis:
‘…….because she’s a vampire but then falls in love.’

In response to the hordes of emails and Twitter comments never asking, ‘When, oh when will we ever see a black and white subtitled Iranian film about a skateboarding vampire?’ I can finally say that it is here in this week’s new release, ‘A Girl Walks Home Alone at Night’. Set in Bad City (yes, really) home to a vast swathe of human detritus, a lone female vampire stalks the city’s undesirables where she comes across one particular man and the two of them can’t help but fall for each other, despite their predicament.

The first half of the film intriguingly unfurls, heralding obvious nods to David Lynch with its grim industrial cityscapes and general quirkiness. A number of scenes are certainly hypnotically compelling, notably early on when a drug dealer picks up the female vampire before heading home where he tries to seduce her. There’s also an impressive long slow motion scene where we find the male lead, ironically dressed up as Dracula, and the bona fide vampire both coming to terms with the mutual attraction they have for one another. As the pasty-faced, blood sucking vampire, Sheila Vand is suitably menacing, donning full chador with a cape and frequently seen lurking alone in the dimly lit, yet curiously desolate streets.

What starts off as a quirky piece of cinema soon deteriorates in the latter half as, despite the romantic plot, it slowly grinds to a virtual halt as nothing overwhelming really comes into play. There is so little narrative drive to propel the story along and, as much as the leads love one another, all we see for it are lingering shots of the characters just standing on camera giving meaningful looks. Resultantly, this just makes the whole thing frustratingly slow to such a degree that it’s hard to contain the urge to shout out, ‘Oh just get on with it!’ which is a great shame as Ana Lily Amirpour shows so much promise early on. Lamentably, by the end your attention is drawn more to the cat that features throughout, who appears to take no direction at all, insisting on looking directly at the camera and frankly, in the end, the feline thesp is a much-needed distraction from the boredom which sets in.