A COSMOLOGY OF MONSTERS GETTING TV SERIES 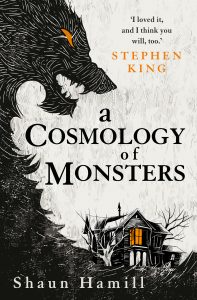 Fantasy-horror novel A Cosmology of Monsters is getting the series adaptation treatment.Saloon Media has acquired the rights to the book and plans to turn it into an eight-part series described as an “elevated family drama.”

The debut novel of author Shaun Hamill, A Cosmology of Monsters was published in 2019. The plot follows the Turner family, who operate an immersive haunted house experience.

Soon, however, they begin to realise that real monsters are at their door…

Caitlin D. Fryers (Wyonna Earp) is creating and executive producing the series, and will work with Melissa Williamson, SVP of Scripted Content at Salon, on development. Hamill will also serve as an executive producer, alongside Michael Kot.