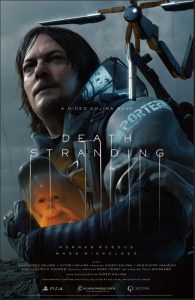 While last year’s The Game Awards played host to the first footage from Hideo Kojima’s much-anticipated PS4 horror game Death Stranding, this year audiences got a whole lot more. This new, extended trailer runs 8 minutes long, and is gonna blow a few minds for sure. It’s brimming with truly jaw-dropping visuals and a sense of dread and hopelessness and was, understandably, warmly received by the awards’ assembled crowd.

Death Stranding stars The Walking Dead’s Norman Reedus (the focus of the trailer) and Hannibal’s Mads Mikkelsen as well as, reportedly, Guillermo del Toro. The footage is all the more intriguing for the fact that no plot details have been released, and while the game would appear to centre on some kind of otherwordly attack on humankind, there are so many out there images and ideas in the trailer, we can only imagine where the story will take its ideas.

Death Stranding is yet to be given an official release date, but we know a lot of you guys are gonna be hungry for this one.