7 Guardians of the Tomb Trailer Brings the Creepy Crawlies

Originally known as Nest 3D, Kimble Rendall’s 7 Guardians of the Tomb is coming to VOD in February. Arachnophobes look away now, ‘cos the film’s trailer is crawling with 8-legged beasties.

The film… “Revolves around a team of scientists who while making the discovery of the century lose a colleague in an ancient labyrinth. The group must battle their way through a swarm of deadly, man-eating funnel web spiders and discover the secret behind the arachnids’ power and intelligence – before it’s too late.” 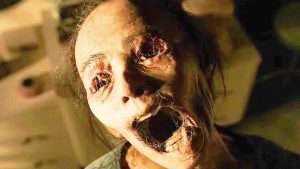 A Chinese/American co-production, the film was shot in Australia. Also starring are Stef Dawson (The Hunger Games series), Yasmin Kassim (Jungle), Tim Draxl (In My Sleep) and Shane Jacobson (The Bourne Legacy).

Rendall directed 7 Guardians of the Tomb from a script by himself and Paul Staheli. It hits VOD platforms on February 23rd.