Synopsis:
Chip’s problem is that he can’t say no to beautiful women. This weakness gets him into a world of trouble when he agrees to help his girlfriend steal $68,000. 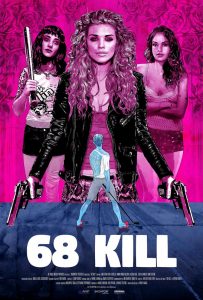 This bit of friendly counsel extended to Chip (Matthew Gray Gubler) in an early scene primly sets the central gender motif of Trent Haaga’s (Chop, Cheap Thrills, Deadgirl) sophomore directorial venture, 68 Kill. Haaga’s acumen for socially relevant scathing scatological satires comes to the fore once more in this coming-of-rage tale as Chip, a hapless, female-dominated soul, finds the road to reason when his out-and-out genuflection finds him accomplice to a petty crime that spirals violently, repulsively, and oftentimes hilariously, out of control.

Meet Chip, Liza’s (AnnaLynne McCord) altruistic little lap dog, answering to her every beck and call. Then again, you can’t really blame the guy for knuckling under as Liza is one desirable devious diva. It’s a cancerous relationship, to say the least, and even though Liza’s got Chip right where she wants him, she’s had it with her life of sucking cock for a living whilst he’s out shovelling shit. Unluckily for Chip, Liza discovers one of her most loyal customers has all of $68,000 dollars stashed in his household safe so she uses her ninja skills in temptress persuasion to convince Chip into helping her get her hands on the bounty.

All goes to plan until they’re caught red-handed but Liza takes care of things with not even the bat an eyelid, much to Chip’s surprise … and chagrin. It’s a labyrinthine plot from thereon in as an unexpected spanner in the works (Victoria, played by Alisha Boe) shows up and Liza’s intentions for her turn everything on its head, resulting in a frantic and riotous game of cat-and-mouse.

As Chip botches his way out of umpteen frying pans and into increasingly desperate, violent and obscene fires in the ensuing dark road trip, we’re introduced to a colourful clan of crooked misfits only the mind behind ‘Chop’ could come up with; most notably Sheila Vand’s goth garage attendant from Hell and a brief, but excruciatingly fun lubricious turn from Hallie Grace Bradley. And Haaga strikes perfect symmetry between the darker, more violent vignettes and the blatantly bonkers humour, keeping the audience just as heedless as Chip as to what’s waiting around the next corner.

Whilst 68 Kill errs a little more towards mainstream than I was expecting, based on Haaga’s insane in the proverbial membrane directorial debut, his sophomore outing still leaves us with virtually nowhere to hide from its bawdiness, frenzied brutality and kinky, kooky humour; all buoyed by a totally talented, committed and game cast. Providing further evidence as to just how comfortably Haaga holds his own as a helmer, 68 Kill has this reviewer hoping we don’t have to wait another six years before we see him back in the director’s saddle.