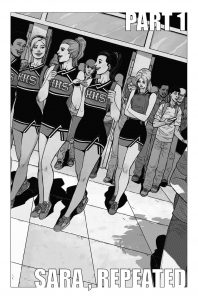 Our journey unfolds around Sara, a blonde, bubbly cheerleader who has learned that the quickest road to happiness is to be hot in high school. But Sara isn’t everything that she appears. While her outside screams smart and confident, her inside is wrecked with worries about her weight, dating, fitting in, and giving a shit. As her days drift mindlessly by, she catches the eyes of super-jock Dirk and is soon pressured to go on a weekend camping trip with the girls and guys in her clique. Little do they know that there is something much more dangerous in the woods than unprotected sex; witches. And these witches are on the hunt for something young and pretty to eat. Will the cavalry of jocks arrive in time to save our princesses in despair or will they too become the witches prey?

There’s a lot to love about this comic. While it clearly falls into the horror comedy genre, Witch Creek Road really attempts to capture the teenage experience of feeling out of place. Sara is never really happy in her position of teen socialite and while she has accepted that her friends are vapid bitches, she never fights it or leaves the group. She needs the acceptance, like a lot of us do, and instead chooses to drop a well-place quip instead of dealing with her problems outright. The side characters are pretty generic, which is the point, and only help add to the disillusionment of Sara’s life. The witch characters are pretty legit though and often times act like a clique themselves. The leather suits are meant to be pretty silly and play on the idea that bad-asses wear leather, similar to the vampires in Blade. 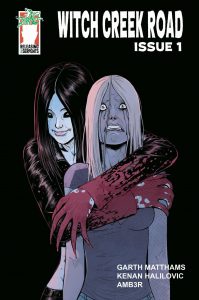 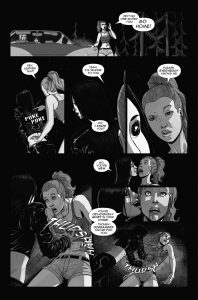 The writer Garth Matthams does a great job writing a well-paced story that makes the most of the pages. The first several pages are crammed with drawings of Sara’s day-to-day life which cleverly establish Sara’s world without wasting an entire issue on set-up. It also has the double effect of claustrophobia, making the following pages of her leaving for the trip a much welcome change (and the subsequent carnage much more jarring). He puts in some solid visual and spoken jokes and creates an easy read that never gets choked up. Of course, the real question for any splatter horror is: how’s the gore? It’s pretty damn good. Artist Kenan Halilovic puts in plenty of head-ripping and guts-pulling for your pleasure while still taking the time to make sure his inks and facial expressions are perfectly touched. It does tend to get a bit stiff in places, but for an independent, free comic, it’s definitely on the professional level.

Oh, did I not mention that? It’s a FREE COMIC! That’s right, boils and ghouls, you can check out Witch Creek Road RIGHT NOW at either tapas.io or webtoon.com. Also keep an eye out for a Kickstarter that aims to release a five-issue graphic novel of Witch Creek Road sometimes in the future.