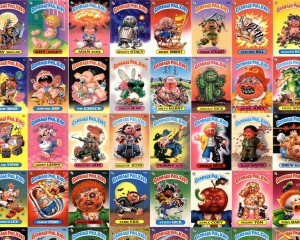 Topps’ Garbage Pail Kids were, without doubt, the 80s’ coolest trading card phenomenon. Originally conceived as a sicko parody of the then-massively popular Cabbage Patch Kids dolls, they appealed to all us kids with a sense of mischief and the macabre, as well as upsetting both parents and teachers. Which obviously made them even cooler. In the little town I grew up in, local TV cameras burst into the sweet shop and demanded they stop selling their Garbage Gang (the retitled British series) cards, and they were never seen there again.

30 Years of Garbage: The Garbage Pail Kids Story is a feature length documentary celebrating the beloved bubblegum cards, for which this trailer has just arrived.

The film is said to be “…jam-packed with interviews and stories from the original creators of the controversial and explosively-popular 1980’s card series. Grown-up kids share nostalgic memories of what it was like to be a part of an international phenomena. Superfans give us a peek at what a 30-year amassment of Garbage Pail Kids memorabilia looks like.” 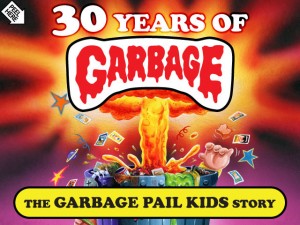 The film features interviews with, among others, original GPK artists John Pound and James Warhola (nephew of Andy Warhol), Pulitzer-Prize winning graphic novel artist and writer of MAUS Art Spiegelman as well as actors from the not-great-but-fondly-remembered 1987 movie.

30 Years of Garbage is released in the US on July 1st, launching with a premiere event in New York.