26 YEARS ON: THE LEGACY OF JURASSIC PARK

1993’s Jurassic Park is no fossil. It’s no relic of its time embalmed in amber. Jurassic Park is still very much a part of film, horror, and society over a quarter of a century after we first set eyes on those CGI-nosaurs.

Steven Spielberg’s movie based on Michael Crichton’s novel and screenplay about the collapse of an amusement park for genetically-engineered dinosaurs was a hit. Released in the summer of 1993, it was the third of Spielberg’s films to become the highest-grossing of all time. Jurassic Park took in $914 million at the box office and held the mantel until 1998’s Titanic.

Another lesson which the film industry learned from Jurassic Park was the importance of the worldwide box office. Sure, the film was a box office smash in the United States. It remained in theatres for well over a year but the vast majority of its income came from overseas – 61% in total. This became a trend for Hollywood to replicate, leading the path for international event films like Independence Day, Titanic, and the Harry Potter franchise.

But Jurassic Park’s legacy is in more than just money. It exists in its sequels, in popular culture, and an endless number of winks and nods in the world of film & television. Let’s take a look at the legacy of this classic. 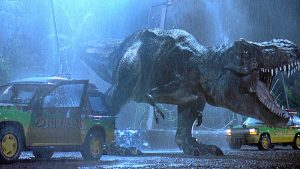 In Popular Culture
Jurassic Park is a family film with a twist. There are some straight-up horror films with fewer moments of terror than this box office smash. Spielberg has always played with horror, especially in his earlier years. Both Duel and Jaws are proof of that but it’s something which is still visible in Jurassic Park.

The horror scenes in the film are quite shocking by the standards of modern family films. The arrival of the T-Rex and the Velociraptor chase sequence are two scenes of genuine horror and tension. They’re instant classics which have been riffed on and referenced by any number of other films and television shows.

The classic ‘ripple in the glass of water’ shot has been referenced in television shows like The X-Files, Futurama, and Scrubs but it isn’t the only instance. Another classic shot in the film is the ‘objects in the mirror are closer than they appear’ from the T-Rex chase sequence. This one has been seized upon by numerous films including Pixar’s Toy Story 2 in which dinosaur character Rex appears in the mirror.

But Jurassic Park also left its mark on film in a larger sense. Of course, the film is often credited as a breakthrough in special effects. From a technical point of view, Jurassic Park is no fossil. Even my modern standards, the special effects on the dinosaurs in particularly are truly impressive. Audiences had only seen glimpses of the true artistry which went into the paleontological creations. 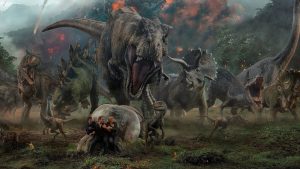 A Franchise Builder
Rather unsurprisingly given its box office success, but Jurassic Park inspired a whole franchise. The Lost World: Jurassic Park followed in 1997 with Jurassic Park III released four years later. The two sequels failed to live up to the original – both critically and commercially – and that seemed to be that. Jurassic Park seemed ready to return to the museums.

But that all changed in 2015. Colin Trevorrow’s Jurassic World out-performed even the original film in the box office. There was $1.6 billion in worldwide box office takings for the film which starred Chris Pratt and Bryce Dallas Howard. Original cast member Jeff Goldblum joined the second but he won’t be alone for the upcoming sequel. Deadline reported in September 2019 that Jurassic Park alumni Laura Dern and Sam Neil will both reprise their roles alongside Goldblum for the film which is set for a 2021 release.

It will continue a legacy on the big screen which exists in so many other places and mediums. IDW started publishing a series of Jurassic Park comic books but the franchise has spread its reach to many other areas.

Jurassic Park has been the basis for numerous video games in a variety of different forms and platforms. There was the Lego Jurassic World game as well as a Jurassic World slot which were both released in 2015. That coincided with the release of the film and brought about this new wave of dinosaur-related media.

Jurassic Park is still impacting the world today. From a film perspective, it certainly holds up and it’s easy to see why it has affected other blockbusters in the immediate aftermath. However, that has been truly impressive is the response to the franchise revival in 2015. Few expected Jurassic World to be as successful as it was and it has influenced film, horror, and popular culture since.