Trailer & Poster for Frightfest-Bound The Creature Below

Following its announcement as part of the lineup at this August’s Horror Channel Frightfest, a new poster and icky teaser trailer have been put out for Stewart Sparke’s Lovecraftian horror The Creature Below.

The film is Sparke’s debut film as director, and features a cast of relative unknowns headed by Anna Dawson, Michaela Longden and Daniel Thrace. With shades of 1981’s Inseminoid and Andrzej Zulawski’s celebrated art-horror Possession, The Creature Below boasts, according to the press release: “…slimy practical creature and gore effects…it promises audiences a deeply disturbing new addition to the international horror scene.” 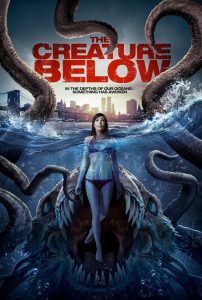 Plagued by gruesome nightmares, her fractured memories of what happened during the accident in the depths of the ocean begin to unravel, revealing her symbiotic bond with an eldritch horror far older and malevolent than she could possibly imagine, one which drives her to carry out its sinister will, with deadly results for those around her.

“We knew that practical effects were the key to bringing our slimy monster to life in a way that would make Lovecraft proud,” Sparke says; “Buckets of blood, guts and tentacles punctuate moments of immeasurable dread as our creature grows in size and appetite.”

The Creature Below will have its world premiere at Horror Channel Frightfest on August 27th.