Waking up on the Sunday morning of FrightFest I still couldn’t quite get over Jason Lei Howden’s Deathgasm. I found it to be absolutely bonkers, completely over the top, full of gore and I bloody loved every minute of it. So it was at that moment when I started to think about the films ahead and I couldn’t wait to start day three.

At the Prince Charles there were several retro screenings which included special presentations of Captain Kronos: Vampire Hunter, Hawk The Slayer and Your Vice is a Locked Room and Only I Have the Key. There was also a very special screening of the Clive Barker cult classic Hellraiser. This was made even more special as actor Nicholas Vince was in attendance to take part in a special Q&A after the film.

Meanwhile, across the remaining main screens and the two discovery screens there were eleven additional features including the World Premieres of Abner Pastoll’s rural french thriller Road Games, Anthony DiBlasi’s ’90s inspired slasher Most Likely to Die and Alberto Marini’s Summer Camp. Also, alongside these films were several special events including a DIY filmmaking panel and two special events all based around artist Graham Humphreys and the Film4 FrightFest guest of honour in Barbara Crampton Reanimated. 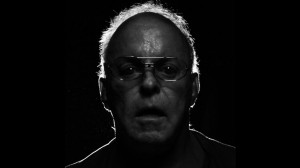 As I arrived at the VUE West End it was time to head into the Film4 screen to take my seat for Victor Zarcoff’s suburban shocker Slumlord. In the film Brianne Moncrief and PJ McCabe play a married couple who move into their new home unaware that their grimy landlord is spying on them.

Slumlord moves along at a steady place and works by creating a world that feels entirely real. The relationship between Moncrief and McCabe’s characters does feel somewhat forced at times but the real sense of unease is created by Neville Archambault’s performance as their landlord. His performance is almost silent, very unnerving and incredibly creepy.

Sadly I found the rest of the film to be very average as there wasn’t anything in particular that was shocking nor suspenseful. That said, on its own merit, the film wasn’t particularly bad. It had great pacing, Zarcoff’s directorial style is tight and the film looked great on screen. It’s just a shame that Slumlord failed to do anything creative or out of the box to stand out from the crowd. 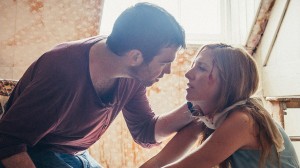 Next up was the World Premiere of Abner Pastoll’s Road Games. Starring Barabara Crampton, Andrew Simpson, Josephine de La Baume and Frederic Pierrot. Road Games follows Jack (Simpson) and Veronique (La Baume) hitchhiking across rural France when the two are picked up on their travels and taken to a mysterious couple’s mansion. Unaware that there is something much deeper going on under the surface, Jack is thrust into a mystery that he could never have imagined possible.

Road Games is an enjoyable but heavily flawed thriller. The film takes a while to develop before the action starts but Pastoll uses this time effectively to develop the relationship between Jack and Veronique. I thought the directorial style of Pastoll was great. The film is sharp and clean but there are many narratives running at the same time.

As you can imagine, this proves to be a little problematic as it gives the film a stretched out feel around the main story. There’s the story about the two hitchhikers, a serial killer, a deranged hunter and an elderly couple. All these narratives do mix into one another but there’s simply far too much going on to fully appreciate the hard work that everyone has put into the film.

Ursula Dabrowsky’s Inner Demon was the next film to play in the Film4 Screen but I took this opportunity to jump back into the discovery screen to catch the World Premiere of Anthony DiBlasi’s Most Likely to Die. In the film a group of classmates gather at a pre-party the night before their ten-year high school reunion and are killed one by one in a manner that ties in with each’s senior yearbook. 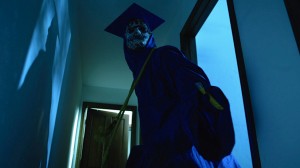 As director, DiBlasi has shown a key eye for detail and a fondness for developing his characters. Here he has taken on the tropes of the slasher genre and blended it with a character driven story to create a really fun ’90s inspired thriller. There are some very creative designs in the killer’s costume and the same is said again in the way he dispatches his victims.

Starring in the film is Glee’s Heather Morris who plays a character who is starkly different to the one she is most famous for. Her character Gaby is headstrong and independent and she is pretty nifty on her feet which she executes perfectly in her chase scenes. She is joined by Celebrity Blogger and former Celebrity Big Brother housemate Perez HIlton. His over the top and campy performance works well here and he offers audiences several light-hearted moments.

With the exception of Jake Busey (The Frighteners) the rest of the cast are relatively unknown to British audiences but they all do a fantastic job to make the film credible. This said, people may find the slow building of the film a little too much but I advise folks to stick with it because when the killing starts so does the fun! 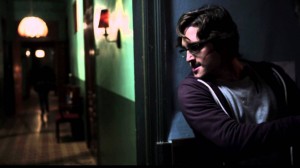 For the next film I remained in the Splice Media discovery screen for the third world premiere of the day, Alberto Marini’s Summer Camp. From the team behind [REC], Summer Camp is one of the most entertaining horror films that i’ve seen in a number of years.

As a feature debut and co-written by Danielle Schleif, I am thoroughly impressed with Marini’s efforts. He takes elements of [REC] and releases it into an isolated mansion turned English language summer camp with a great big dollop of humour. Don’t be mistaken though as Summer Camp remains a horror film first and foremost, having its fair share of tense moments that will have you holding your breath.

The cast are equally as good and do a fantastic job walking a tightrope between comedy and horror. The film relies upon perfect timing in delivery and the cast nail it every time. There are moments when their performances are ridiculously over the top but in this case the film calls for it and they are executed perfectly.

There are many stand out moments in this film that stayed with me simply because I’ve never seen them happen on screen before. Not only does this make the film feel incredibly fresh but it made the experience that much more incredible. For example, during a chase scene two characters are hiding but an introduction of a mobile phone in this scene resulted in my biggest laugh-out-loud moment and the most genuinely genius moment that I’ve seen on film in a long time.

After the film Alberto Marini returned to the stage to thank everyone for attending. He seemed very humble with what he created but he was excited as everyone seemed to have loved it too. It knows how to keep you in suspense, it knows how to make you laugh and it certainly knows how to take you by surprise and it is for that reason that I strongly urge anyone to check it out.

So how do you follow two superbly fun films? Well the answer to that is simple, you watch another film that is equally as fantastic of course! 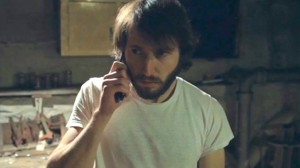 They Look Like People is directed by Perry Blackshear and stars MacLeod Andrews, Evan Dumouchel and Margaret Ying Drake. This ‘psychological bromance’ follows Wyatt (Andrews) who believes the people around him are turning into evil creatures. Turning to his only friend, Christian (Dumouchel), Wyatt’s obsession to survive begins to take hold but are the voices real or a figure of his imagination?

Bleak, disturbing and utterly unnerving, They Look Like People is a slow-burning and almost hypnotic thriller. Despite a limited budget, Blackshear has crafted a film about mental illness which is backed up by truly terrific and flawless performances from the cast. Speaking of which, MacLeod Andrews and Evan Dumouchel are phenomenal actors. The story is so intimate between the pair and their chemistry is undeniably strong and it shows on screen.

As a whole, it is a film that I found to be both terrifying and compelling and very different to other films that I have seen before. The pacing of this wonderful yet harrowing slice of independent cinema was spot on. It moves at the right pace and slowly draws the audience into the story without feeling stale. Right up to the devastating and nerve-shredding finale I was fully immersed in the world that is so lovingly put together by Blackshear and as such, loved every single passing minute of it.

So that was Day 4 at Film4 Frightfest. Mostly a strong line up for the day with the exception of Slumlord and Road Games. Thankfully the quality was picked up by Most Likely to Die and Summer Camp. Topped off with They Look Like People the day ended on a high note and I’m pleased I got to see them all.

On reflection, I give the title of best film to Summer Camp. I loved They Look Like People. I thought it was truly fantastic and in all honesty a much better film than Summer Camp but it can’t quite stand up to how entertaining it was. This said, regardless of entertainment factor both films (along with Most Likely to Die) will join my home collection if and when they are released on DVD.

Want more? Here are links to our other Film4 FrightFest Day 4 coverage: