It’s surprising how time flies when you’re at Film4 FrightFest, but then again it always does when you’re having a blast and this year was no exception. After watching and falling in love with the fantastic Turbo Kid it was time to get ready to begin the second and first full day at Film4 FrightFest where we had six films to watch including Padraig Reynolds’ Worry Dolls, Steve Oram’s Aaaaaaah! and Ted Geoghegan’s hotly anticipated We Are Still Here.

This morning our main screen choices were Hellions, The Diabolical and Landmine Goes Click. As we had the privilege of watching The Diabolical and Landmine Goes Click prior to the festival we decided to venture into the discovery screens to see what was on offer there but before that, it was time to head into the main screen to experience the latest offering from Bruce McDonald, the director of Pontypool. 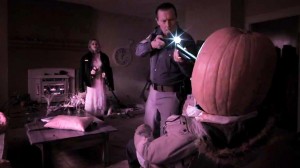 Hellions stars Chloe Rose, Robert Patrick and Rachel Wilson and follows Dora (Rose), a teenager who finds out that she is pregnant. Wanting to avoid all sense of responsibility she decides to celebrate Halloween by going out to a party. So, after dressing up in her Angel costume she eagerly awaits the arrival of her boyfriend but a malevolent group of monstrous trick-or-treaters come knocking with the intention of taking her unborn child.

I loved Pontypool and I was hoping that McDonald would deliver another solid indie hit. However, Hellions is not of the same caliber. The performances from Chloe Rose and Robert Patrick were fine but the entire execution of the film seemed to be lacking anything of substance. The visuals were very bland, the characters were not interesting, the film never really went anywhere nor were there any surprises along the way. In all honesty, I found the film underwhelming and it never really packed the same punch that Pontypool had.

Next up in the main screen was Landmine Goes Click (read our review here) so I ventured into the Splice Media discovery screen to watch the world premiere of Russell Friedenberg’s native American curse movie Wind Walkers. Starring J LaRose, Glen Powell, Zane Holtz and the director himself, Wind Walkers tells the story of a group of friends and family who go hunting in the Everglades only to discover they are the ones being hunted by a malevolent entity. 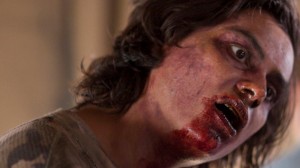 After a brief introduction by Russell Friedenberg and his cast, the lights went down for the next 90 minutes as the audience watched a nicely paced horror that was entertaining and fun. I thought the performances from Zane Holtz, Glen Powell and J. LaRose were great but, then again, there was not a single performance that was over the top. However, as with any indie picture you can expect it to be a little rough around the edges and Wind Walkers, as expected, did come with a few teething problems. This said, I was entertained, the make-up effects were fantastic and the film firmly held my attention throughout.

After the film Russell Friedenberg returned to the stage along with his cast including Zane Holtz, J. LaRose and Tsulan Cooper to take part in a Q&A. Questions were asked about the location, the action scenes and I asked Friedenberg what it was like to balance the job of director, editor and actor. His answer was coherent and well thought out. As director he showed a great deal of respect for his cast and for the opportunity to make the film. I’d be interested to see what he comes up with next.

Moving on, it was time for the main screen to experience Alistair Legrand’s sci-fi horror The Diabolical so, after having seen the film previously (read our review here), it was decided that we would remain in the discovery screen to watch the world premiere of Padraig Reynolds’ Worry Dolls. 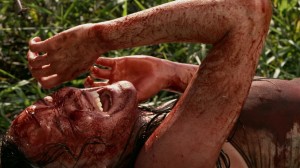 After gunning down a serial killer in a remote hospital, a homicide detective recovers a box containing several wooden dolls. After mistakenly giving the box to his daughter, the dolls are made into necklace charms and are sold in a collectibles shop. Not long after, those that bought the necklaces begin to act out of character and begin to slaughter people. Soon enough it becomes clear to the detective that the dolls are cursed and he is thrust into a rush against time to stop the murders and save the life of his 8 year-old child.

As director, Padraig Reynold’s has delivered another chilling cat and mouse thriller that is just as entertaining as Rites of Spring was. The film is superbly directed, the script is sharp and a fantastic performance is given by all. The death scenes are brutal and the sense of tension builds brilliantly. This said, the ending is a bit witless but that doesn’t stop Worry Dolls from being one of my favourite films of the entire festival, especially after the very entertaining Q&A with the director himself.

For the fourth film of the day we had the option of watching the European premiere of Doran Paz’ found footage pilgrimage horror JeruZalem or we could remain in the discovery screens. However, there was a strange buzz of excitement surrounding the world premiere of Steve Oram’s Aaaaaaah! so we opted for that instead. 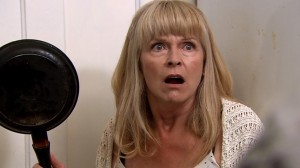 Perhaps one of the strangest films I have ever seen, Aaaaaaah! is not exactly the sort of film that you would normally find at Film4 FrightFest. It has very few genre elements and instead plays out like an extended sketch scene you’d find on some Channel 4 comedy program. Entirely told through ape language where the cast grunt, scream and laugh their way through 90 minutes, Aaaaaaah! was just pure bonkers.

The majority of the crowd seemingly enjoyed the film but I was puzzled as to why it was at FrightFest simply because it was so different. This said, Steve Oram was in attendance along with a lot of the principal cast members including Toyah Wilcox. During the Q&A after the film Oram proudly talked about what inspired him, how he convinced his cast to star in the film and what it was like to be on set. So yeah, if you want to see the film be sure to catch it on its upcoming tour around Picturehouse cinemas across the UK. 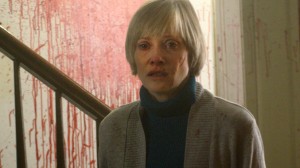 After that slice of bonkers it was time to return to the main screen to watch Ted Geoghegan’s homage to all things Fulci, We Are Still Here. Starring Barbara Crampton, Andrew Sensenig and Larry Fessenden, We Are Still Here follows Paul and Anne who move to an isolated New England farmhouse to start a new life after losing their son. As the grieving couple begin to settle in they become the prey of a family of vengeful spirits residing in their new home sparking off a battle between the dead and the living. Prior to the film Ted Geoghegan and Barbara Crampton were on hand to introduce the film and, after a brief anecdote of how the project came about, it was time for the film began.

Throughout the film We Are Still Here sure had its creepy moments and the crimson ending was something of a spectacle. However, it really surprised me to find out just how much dark humour was in the film. I was expecting a very moody and slow-burning masterpiece but what I got was so much more. I loved the performances provided by Crampton and Sensenig and it was great to see Fessenden ham it up in his usual way as the family friend. Overall, I would have preferred the film to focus more on scares than injecting humour but I still enjoyed We Are Still Here and I look forward to revisiting it again sometime soon.

After that it was time for the main screen to embrace Will Canon’s Demonic, a unique take on the possession sub-genre. As we had already seen Demonic (read our review here), it was time to face Brian James O’Connell’s Bloodsucking Bastards. Picture Office Space meets Shaun of the Dead and you’re on the right track… 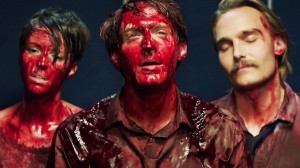 Cabin in the Woods’ very own Fran Kranz plays Evan, an office worker desperate for promotion, is overlooked by his boss in favour of an enemy from his college days who just so happens to have plans to improve the performance of everyone in the office by turning them into bloodsucking vampires. Also starring Emma Fitzpatrick, Joey Kern and Jacquelyn Palmquist, Bloodsucking Bastards promised to be a hilarious movie with plenty of bite.

I had a blast with this one. It’s not as polished or anywhere as creative as Shaun of the Dead but I thoroughly enjoyed it. I laughed, I jumped and I had a blast. Fran Kranz is unsurprisingly entertaining playing his role with perfect comedic timing in the same way that his character in Cabin in the Woods stole the show. The jokes do fall flat at times as the same joke is used time and time again but there are some genuinely fresh and hilarious moments that still make me smirk to this day. So if you’re looking for a fun movie to watch on a Friday night you could do a lot worse than Bloodsucking Bastards.

After six films it was time to return to my hotel to get some sleep but, looking back at the films I watched, the best film of the day had to go to We Are Still Here. Speaking of which, we had the pleasure of sitting down with Barbara Crampton and Ted Geoghegan about their film and you can read Barbara’s interview here and Ted’s interview here. For our full review of We Are Still Here click here.

Roll on Day 3 of Film4 FrightFest.