Released at the end of last month, the small screen adaptation of Neil Gaiman and Terry Pratchett’s Good Omens was a delightful theological romp filled with more laughs and heart than you could shake a crucifix at. But not everyone was amused. Accusing the mini-series of normalizing Satanism, one US-based Christian group called the Return to Order launched a petition urging Netflix to cancel Good Omens, quickly gaining 20,000 signatures.

The only problem with their ineffable plan? Good Omens isn’t anthing to do with Netflix Original. It’s a joint venture between Amazon and BBC Two.

Probably should have checked that first, guys.

The petition was later updated to reflect the embarrassing snafu, but not before Amazon and Netflix could have some fun. Netflix UK & Ireland tweeted “ok we promise not to make any more” while Amazon Prime Video US promised Netflix “we’ll cancel Stranger Things if you cancel Good Omens.” 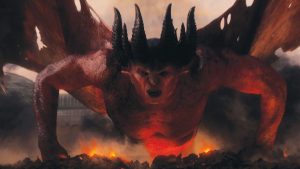 Neil Gaiman also weighed in, writing “I love that they are going to write to Netflix to try and get #GoodOmens cancelled. Says it all really.”

Good Omens is currently available to stream on Netfl… Er, Amazon Prime Video. It will also air on BBC 2 in the UK later this year, so start writing to ITV now if you’d like to complain.