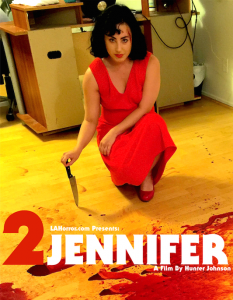 In this sequel to James Cullen Bressack’s To Jennifer, Spencer and Mack head out to make the perfect sequel and to do that… they need to find the perfect Jennifer.

2 Jennifer is very special. It takes the notion of self-awareness to a whole new level as we follow the young director Spencer (Hunter Johnson – who is the actual, real director of the film) a ‘friend’ of James Cullen Bressack (the actual, real director of To Jennifer) who has been asked to direct a sequel to To Jennifer. As with the first film, this one is shot entirely on an iPhone which feels more appropriate this time round, because this is a mock behind-the-scenes insight into the making of the To Jennifer sequel. We follow Spencer and his producer friend Mack (David Coupe) and their journey to making perfect follow-up. In particular, the pair seek to find the perfect star of the film: Jennifer. Are you with me? Just think of The Human Centipede 2; it’s sort of like that, but not quite as sick or disturbing or scarring.

Oh wow, this is one hell of a journey. From the beginning we know that something is up and that there is more to Spencer’s sequel plan than he is letting on. Also, if you’ve seen the first film then you’re probably already wary and wondering what mistruths are being hidden this time. This very obvious indication that all is not what it seems immediately renders everything that Spencer does as suspicious. Why does he need a woman who is actually called Jennifer? Why does James never get in touch? This instant cause for concern means that we will constantly nit-pick Spencer’s actions as a way to dig beneath the surface of his psyche to determine what is actually going on. I guess the fun is in trying to figure it all out; 2 Jennifer is a ticking time bomb for its audience who must figure out the twist before the credits roll. Challenge accepted.

In many ways 2 Jennifer is an improvement on its predecessor. Where the first film was a pretty simple found-footage flick – not without its surprises, mind – 2 Jennifer’s levels of self-reference and meta make for a refreshing treat and gives the film a solid identity. The concept alone deserves to be commended, because it is rare to be handed a sequel that tries and succeeds to do something different. The pseudo-documentary style decision is great one and heightens the film’s essence of reality, which is what all found-footage films should strive to achieve. That being said, there are plenty of moments that deviate from reality, as with many films like this, there are times when you’re going to wonder why they’re filming at all. Particularly when everything instantaneously falls apart and comes together towards the end.

There are a couple of pacing issues, with a lot of the first third of the film feeling a little dull and pointless. The introduction to Mack’s housemates is particularly irritating as we’re given a typical ‘party, party!’ scene that found-footage horror films can’t seem to avoid. The film works best when it steers way from these typical tropes, but with the leading actors being a group of twenty-somethings, what can we expect? If 2 Jennifer had pushed its concept further, this could have been something notable but sadly, this never feels truly unique in its execution and it does, overall, feel and play-out very familiarly.

When 2 Jennifer draws to a close and the mighty reveal is slowly unveiled things get interesting. The strongest aspect of this is the climactic finish – which is more satisfying than what To Jennifer eventually offered – even though it borderlines on the ridiculous. It’s difficult to describe without spoiling, and it would be a crime to do so, but I am certain there will be one classic horror character in your mind when the credits role on 2 Jennifer. So far, the film has been a slow-burning pot on a low heat, but when the temperature rises at the hour mark, everything goes suitably crazy and it’s great. The finale is executed perfectly and when the plaster of surprise is ripped off, the journey we’ve travelled to get to this point is worth the wait.

There is a generous helping of special features for 2 Jennifer on the U.S. DVD too, including deleted scenes, a commentary with director Hunter Johnson, producer Frank Merle, executive producer James Cullen Bressack and actress Lara Jean Mummert and a photo gallery. Out of the five deleted scenes, the best one features James Cullen Bressack, and without spoiling, he turns the audition process on its head in a hilarious way as he channels Heath Ledger’s Joker. It’s always enjoyable hearing about what happens behind-the-scenes on low-budget flicks and 2 Jennifer’s commentary track is fascinating if you want to hear the reasons behind technical, character and plot development decisions in the film, as well as an in-depth look at the “movie within the movie”. It’s an immersive and fun journey through the film, which will certainly heighten your appreciation of 2 Jennifer. The photo gallery shares a few posters for the film and behind-the-scenes snaps of the cast and crew. 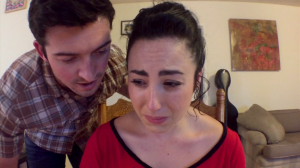 Despite its many shortcomings, 2 Jennifer is far from a failure and it is a surprisingly entertaining, refreshing and enjoyable watch. It’s a bit of a chore to get through in the beginning, but when it picks up steam and the secrets are spilled, 2 Jennifer becomes a worthy sequel that is filled with an honest helping of bloody madness.