Synopsis:
Army psychiatrist Col. Kane (Stacy Keach) is posted to an isolated Californian asylum to asses the mental wellbeing of its ex-military inmates, suspected of faking their lunacy. Soon Kane starts also showing signs of psychological unrest and prescribes an alternative method of treatment for his patients. 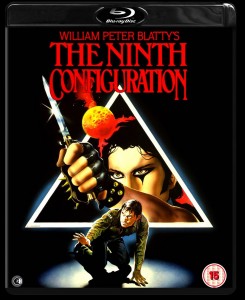 William Peter Blatty made his directorial debut in 1979, following the success of The Exorcist, by adapting his second, satirical novel Twinkle, Twinkle “Killer Kane” for the big screen. Blatty re-wrote and re-published the novel in 1978 as a darker, more serious tale under new title: The Ninth Configuration. His adaptation is an obscure, tension laden tour de force that shimmers with a restless and surreal visual energy. A box office flop upon its initial release, possibly due to a beguiling tone and tendency to flit through various genres and styles, which made it rather hard to market. Blatty blamed the financial failure on Warner Bros spending too much on crafting a trailer, but The Ninth Configuration has since blossomed into a cult classic: a magnetic, mentally rattling, all enrapturing masterpiece which it’s director believes to be his true sequel to The Exorcist.

The film does feel and flow like a stylistic follow-up to William Friedkin’s 1973 adaptation of Blatty’s novel, in that it harvests a similar, stark, edgy atmosphere but not the pseudo-documentary style that Friedkin employed. It shares Production Designer Bill Malley, actor Jason Miller, who played Damien Karras, and here stars as the tousled Lt. Frankie Reno, an inmate who spends most of the film frantically prepping a theatre production of Hamlet starring a cast of dogs, with assistant Lt. Spinell (Joe Spinell). Ed Flanders (Father Dyer from The Exorcist III) conveys the same droll vocal tones and wit he displayed opposite George C Scott, in the role of Colonel Richard Fell, while cinematographer Gerry Fisher also went to work on The Exorcist III with Flanders and Blatty. But despite these parallels and swirling spiritual subtexts, The Ninth Configuration is a complex, cosmic and feral beast unto itself.

The asylum’s dank gothic interiors (shot in Budapest) menace accordingly, contribute to a fitting unease while serving as a rustic, dilapidated backdrop to the vibrant, gaudy bedlam erupting within. This twisted, circus-like anarchy is counteracted by dark cinematography and set design as the inmates’ antics crack Kane’s psyche along with the castle walls, rattling both its stone and human foundations. Stacy Keach is staggering as Kane, gleaming on the brink of madness throughout like a pan of simmering blood which eventually erupts in the invigorating bar-set finale. 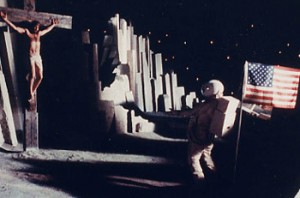 The supporting cast also excel in their roles, blurting Batty’s punk prose, theological monologues and mad ramblings in scenarios such as: a scene featuring an inmate dressed as a nun (George DiCenzo) performing an exorcism on a vending machine (the film was part-financed by Pepsicola), Robert Loggia in black make-up sprouting Al Jolson’s Rainbow Round My Shoulder, Moses Gunn in a Superman outfit with an “N” insignia (for Nammack/ his character) and Astronaut Bill Cutshaw (Scott Wilson) interrogating the severed head of a boar. Richard Lynch pops up as a latter half bit-part thug during the exhilarating bar brawl which twists the story into darker terrain while Tom Atkins co-stars as the stone faced Sgt. Krebs.

Blatty is mostly known for his theological horrors pondering the existence of a God while characters undergo psychological/ spiritual meltdowns which meld into a magnificent, mighty and resonant depth to inform the surface story, or in this case “how one selfless act can demonstrate the existence of divinity”. “Blatty’s spirituality permeated the essence of the film, which serves as an antithesis of The Exorcist,” states Stacy Keach in the extras, and there are several surreal dream/ fantasy sequences in The Ninth Configuration that are as equally unsettling as they are enchanting. A close to the opening scene featuring a planet almost entirely engulfing the screen, in the run up to a rocket launch, is totally breathtaking but merely one of many startling moments that make The Ninth Configuration a masterpiece, which will hopefully find a wider audience with this excellent new blu-ray release.

Extras include: an interview with William Peter Blatty who looks back fondly on the production while relaying fascinating facts and anecdotes: the trouble with shooting in Budapest, religious metaphors in his work (“Everything I wrote is to do with fate” and “is an argument for God’s existence”) and being surprised to discover how easy it was directing a feature “I became a bit dangerous when I thought I knew what I was doing”.

“The Party Behind the Curtain” is a compilation of archive interviews with Tom Atkins, Richard Lynch and Jason Miller who reminisce fondly on getting wasted then arrested in Budapest for attacking the Nigerian ambassador. Special features also include: an excellent archive featurette with a fresh-faced Mark Kermode (who provides an audio commentary alongside Blatty), an interview with composer Barry De Vorzon and several deleted/ alternative scenes with written summaries detailing their origins/ the reasons they were cut.