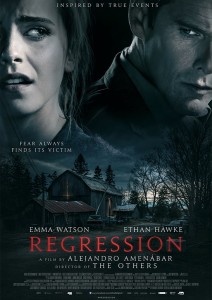 Synopsis:
A detective in Minnesota investigates a teenage girl’s chilling claims that her father sexually abused her as part of a ritual for the satanic cult he belongs to. When her father confesses to the crimes he is accused of despite claiming to have no recollection of them, a psychologist is brought in to help him remember, unwittingly uncovering something much darker in the process…

Regression is a psychological horror thriller written and directed by Alejandro Amenábar, who proved himself comfortable with the horror genre in 2001 when he made the deliciously creepy ghost story The Others, but Regression sadly does not live up to its potential. The film opens in theatres in the US this week and has just had its UK DVD release, but it isn’t likely to leave a lasting impression.

Ethan Hawke (Sinister) stars as Detective Bruce Kenner, a man trying to investigate the horrifying claims of ritualistic satanic abuse made by the traumatised Angela (Emma Watson, of Harry Potter fame). Kenner is your typical obsessed investigator, though surprisingly he comes without the almost obligatory tragic backstory. In fact, Kenner doesn’t have any discernible backstory at all; we know next to nothing about the man except that he seems lonely and is slightly prone to overreacting. That’s not to say that Hawke’s performance is bad; he and Watson both seem to be trying their best with the lacklustre material, and despite Watson’s distracting attempt at an American accent, they get the job done. The supporting cast is also decent, including Watson’s fellow Potter alumni David Thewlis as Professor Raines, the psychologist tasked with making Angela’s father remember what he did to her. Hannibal’s Aaron Abrams shows up in a minor role as one of Kenner’s more hot-headed colleagues, breathing a little life into some of the duller expositional scenes in the film. 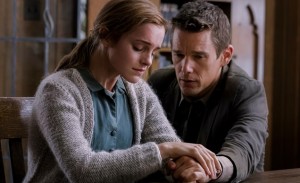 Overall, the performances are fine. The story, too, seems promising. Regression was inspired by the hysteria over alleged widespread satanic ritual abuse that swept the United States in the 80’s and 90’s. Set in 1990, the film explores the idea that suggestion and panic can lead to fiction becoming fact in the minds of the masses. Angela says she witnessed her father and dozens of other cult members performing black mass, including the sacrifice of an infant; her father doesn’t remember and another accused cult member actively denies it, but even the detectives are suckered into believing her story without any evidence except her word. Add to that the fact that Raines is using the now widely discredited techniques of recovered memory therapy, which were known to implant false memories, and you’ve got the ingredients for a perfect storm of public hysteria and moral outrage. Sounds interesting, right?

Well yes, at times it is, and Regression will probably keep you intrigued for most of its runtime. So what exactly is wrong with it? I couldn’t put my finger on it at first, but shortly after finishing the film, I realised the truth: it doesn’t make much sense.

The idea could be truly fascinating if handled with a little more care and subtlety, but the characters in Regression seem ridiculously susceptible after just one dodgy therapy session or bad dream. Detective Kenner is so quick to become spooked and deeply paranoid that one has to wonder if all his previous cases have been no more threatening that kittens stuck in trees, and Angela’s father is supposedly willing to admit to committing horrifying acts he doesn’t remember even before undergoing the bad therapy. There are also a few points in the film where characters uncover supposed memories that could not possibly have been falsely implanted in their minds without some kind of telepathy at play. The screenplay thinks it is very clever, but there doesn’t seem to be much self-awareness about how silly it is at times. 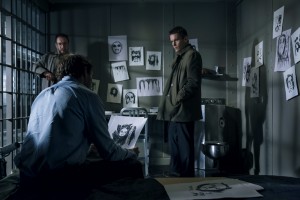 The intriguing concept and decent performances elevates Regression somewhat above the usual black cloaks and pentagrams fare of most satanic horror fodder, but there isn’t any real magic in this particular offering. It reminds me a little of 2013’s Mindscape, and there are shades of Ti West’s The House of the Devil in there as well; I’d check those out first long before you give Regression a watch. It isn’t one to remember.