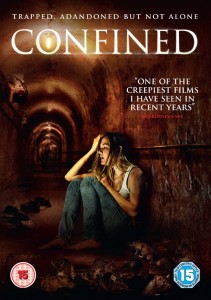 Synopsis:
Troubled Streak takes a job as night security guard at an abandoned luxury apartment building. On her first night, she begins to realise that she and her partner might not be alone there.

There are films which are badly made, and films which are so bad they’re good. And then there are bad films which are just boring, and 2015’s Confined unfortunately falls into this dreaded third category. I had a lot of trouble finding out anything about this film after stumbling across it when it was released on DVD in the UK last week, only later realising that it also goes by the titles The Confines and The Abandoned in America, both of which make more sense. The tagline for Confined reads ‘Trapped, abandoned but not alone’ and after watching the film, you’ll be wondering if the person who wrote that had actually seen it.

Our main character Streak (Louisa Krause) is not really confined or trapped at any point in the film, save perhaps a brief point where she’s stuck in an unmoving lift, and a few minutes towards the end where a door is locked. She walks into the place of her own free will, and continues to walk around it with little happening for much of the run-time. She can leave if she wants, and doesn’t. She even lets a homeless man in at one point, for no better reason than to make the viewer believe that something might happen soon, possibly, please.

She isn’t particularly abandoned either. We are told early on that the mentally unstable Streak needs this job or she’ll lose her child, but she isn’t alone there, with pervy co-worker Cooper (Jason Patric, The Lost Boys) at her side. So at least the last part of the tagline got it right. 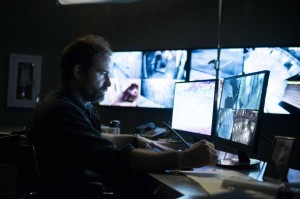 Of course, it’s not Cooper’s presence that she needs to worry about, but something eerie lurking behind a door in an unfinished part of the building – the remains of an institution where deformed and mentally ill children were abused and neglected. Why was a luxury apartment complex built on top of it? I could not tell you. There’s a chance that the film tried to explain it, but there was so much other nonsense going on that it got lost. It’s not as though the institution was run in secret, because Streak digs up an old news report about the mistreatment there. And the ghosts of the children are evil, maybe. They certainly kill a man, and possess some chairs to form a circle around Cooper. Scary, right?

Well no, but at least something starts happening when the ghosts show up, because there is so much nothing in this film that I considered turning it off at several points during its first half. And boy do I wish that I had, because the twist ending is infuriatingly nonsensical, and makes certain meandering subplots that our main character didn’t even witness utterly pointless. 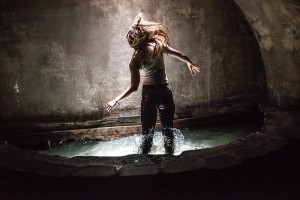 This film could have worked if it had known what it wanted to be and stuck to it, but the plot somehow manages to be both all over the place and still devoid of any substance. Maybe it’s a psychological thriller about an unstable woman trying to hold onto her sanity in a strange abandoned building, or maybe it’s a dumb ghost story about an evil hospital – choose your own adventure, and try not to fall asleep along the way. Jason Patric is the best part of the film by far, being uncomfortably creepy when we first encounter him and gradually becoming more sympathetic and likeable; the sets are also very nice, but that’s all the praise I can give Confined. It’s dull. Do yourself a favour, and abandon this film from your list.