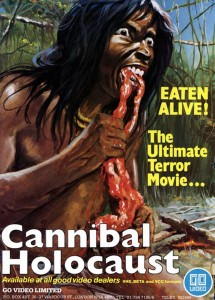 Synopsis:
A rescue team is sent in to the Amazon to find a missing documentary film crew that went there a few months earlier to film the indigenous cannibal tribes. The rescue team find the film reels from the missing crew and take them back home to watch. The events unfold onscreen and we see the real horror of what happened in the jungle, but who were the real savages?

Killer Line: “The more you rape their senses, the happier they are.”

How far will the media go to get a sensational story? Is the degree of horror that we feel sometimes when watching the news any different to what we feel when watching certain horror films? Ruggero Deodato believes the media go too far, and that the events portarayed on the news at times are just as deserving of age certification as fiction films. Cannibal Holocaust holds a deep message and it isn’t merely  the cannibal exploitation film I was expecting it to be. The world was shocked when Cannibal Holocaust was released and as a result it was banned in around 50 countries including Italy where Deodato is from. In the majority of cases it was the animal cruelty that caused the film’s infamous reputation but at first it was believed to be a snuff film and that the actors themselves had been killed off by the director. He was arrested shortly after the release of his film and put on trial for 20 days. The film’s actors had signed a clause stating they would disappear for a year after its release so as to give the impression that they had been killed but they were forced to come out of hiding early so that Deodato could prove his innocence. After the rumours of it being a snuff film were quelled, it was the real-life instances of animal cruelty that become the new focus, as well as the plentiful murder, rape and gore scenes that it features. Cannibal Holocaust was released in 2011 in the UK with 15 seconds of an animal cruelty scene being cut, so the version out now is largely uncut. The most recent Blu-ray release gives you the option to watch the film with or without the animal scenes which may encourage some Cannibal Holocaust virgins to give it a try. The scene involving a turtle was very difficult for me to watch and I’m not too eager to see it again so I’d be happy with the version free of animal cruelty. At least the animals were eaten up by the crew afterwards, so it wasn’t a completely pointless act. 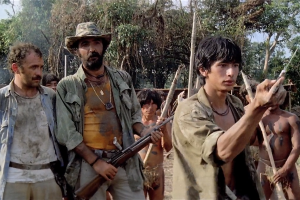 Despite the reputation that Cannibal Holocaust has garnered since its release in 1980 and its famous inclusion on the video nasty list, there’s no doubt that it is a well made film. It has a good structure which first shows the rescue team making their way through the Amazon and meeting the native tribes, and then back to New York to view the found footage from the missing documentary film crew. The shaky cam techniques used in the second part of the film are what modern day found footages films have taken their inspiration from, most notably The Blair Witch Project. This way of filming led to the viewer believing that what they were witnessing was real, and the animal cruelty scenes reinforced this belief. The acting in this film is good, especially that of Professor Monroe(Robert Kerman) who is part of the rescue team. I half expected the acting to be shoddy but it’s up to scratch and the dubbing over the top from the actors who spoke in English is just fine. The location is brilliant as you’d expect from it being set in a jungle, it’s a mix between sets and real jungle and we’re treated to bright, vibrant colours which are brought out very nicely on the new Blu-ray edition. Riz Ortolani did an excellent job with the soundtrack and the haunting main theme is a personal favourite but the soundtrack in it’s entirety is worthy of a second listen on YouTube.

The message Deodato is portraying in Cannibal Holocaust is that the media will do anything to bring a sensational story to the screen with the most graphic images and we see it with the documentary or rather mondo film crew in the film. Prior to their journey in to the Amazon, the film crew made a documentary in which they paid off mercenaries in order to obtain shocking graphic footage to and they are determined to make another shockumentary. The crew in Cannibal Holocaust are shown to have little regard for the indigenous tribes and this leads to them burning a village down, terrifying the locals and raping a young girl numerous times. That same girl is later seen impaled on a stake in the iconic image we’ve all seen, as a result of them assaulting her. The disregard they have for the environment around them is obvious as they lumber around looking for the perfect footage to take home and they even film their friends being killed without attempting to help. This lack of integrity in the media is what Deodato was angry at and the TV executives in New York certainly lack in morals when, upon viewing the footage they are desperate to put it on the television. That is until they see the last reels of film. This social message made Cannibal Holocaust much more interesting for me to watch and it became something more than the simple video nasty I’d believed it to be. 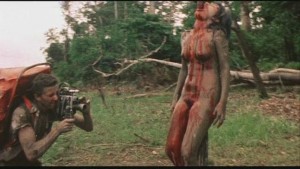 “I wonder who the real cannibals are.”

I don’t need to tell you that Cannibal Holocaust is difficult to watch, or that it has graphic scenes of violence and gore. You must be already aware of it. What is missing from the infamous reputation that it holds is what the film is really about and the message that it carries. Deodato doesn’t believe the film to be horror as he is merely portraying real life events and real life events are horrifying but the public have become blind to them. The animals in this film are killed on camera and then eaten by the crew afterwards – this is shocking to a modern day audience. I just want my meat served on a plate, I don’t want to see the gory shit that happens before it gets there! But sometimes we DO need to see the gory shit. I recommend you watch Cannibal Holocaust if you’ve so far shied away, and do the film a favour and watch it on Blu-ray.