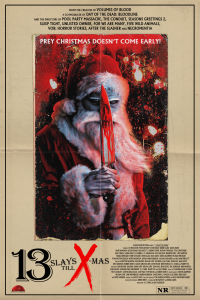 Made up of 13 festive tales of terror, the film is set on Christmas Eve and sees five seemingly random men gathering at a dive bar after receiving a mysterious invite. To pass the time, they decide to tell scary stories. But as they take turns spinning their yarns, it becomes clear they may be harboring a deadly secret…