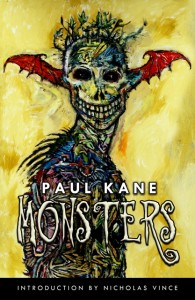 Paul Kane shits books; eight novels, seven novellas, nine short story collections, and thirteen edited/co-edited books. Best known for his Hooded Man series, retelling Robin Hood in a post-apocalypse world, Monsters collects together 17 stories and a dark ditty that have mostly been written for genre magazines and other collections over the past 16 years.

They say don’t judge a book by its cover – but when the cover art has been painted by Clive Barker, it’s certainly worth a second glance. The monster on the cover – all rainbow whorls, grinning teeth and eye sockets – stands side on, looking over its right shoulder at the reader. Standing out against a jaundiced background, it is watching us as we watch it – seemingly posing the question ‘Who exactly is the monster here?’

Don’t go looking for answers in Nicholas Vince’s foreword – he has little to say (‘Personally, I never read introductions in books.’), and nothing to add to a discussion of monstrousness. Paul Kane is much more helpful, with an afterword discussing the origins of his short stories. It’s interesting to see him develop as a writer from his early stories where he seems to be trying to find a voice to the more mature recent work. Of course the flip side of the coin is that you have to negotiate a few so-so and so-what stories to get to the tales that linger on in the imagination.

St August’s Flame deposits a random businessman with lots of money in an Egyptian desert in the middle of a storm. He quickly finds himself at a monastery during Earth Hour (candles only, folks), and somewhere in the catacombs beneath there may or may not be the eponymous flame (doing my best to avoid spoilers here). When the businessman finally gets his hands on it (oops) it reveals a lot more of the future than he, or indeed anyone else, can handle.

Three connected stories – Nighlife, Half-Life, Lifetime – trace the melancholy arc of a werewolf from the North of England and his rapidly shrinking social circle. There’s real pathos here as we watch all the main characters, despite their many lycanthropic advantages and all that goddam hair, (spoiler alert) right royally fuck up their lives and those of everyone they come in to contact with.

Keeper of the Light is an original take on the diligent lighthouse keeper – it’s Earth Hour here too – as the protagonist fights to keep the lights on, and other things with sharp teeth at bay.

Another favourite was The Weeping Woman, which teaches us the important lesson that one should never, ever, under any circumstances, help one’s fellow citizens, especially when they have poor personal hygiene.

Kane is clearly at his best when plot-driven. Characterisation is generally brief, protagonists being clothes horses upon which to hang plot twists of varying degrees of originality. But when he is on form there are strong ideas here to raise the heaviest of eyebrows, and make you turn back to that monster on the front cover for company.