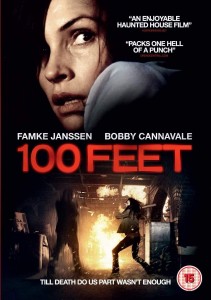 Synopsis:
Condemned to house arrest after killing her abusive, ex-cop husband, a woman discovers the home she is now imprisoned in is haunted by his vengeance-seeking spirit…

First released on UK DVD back in March 2009 by the now defunct DNC label, writer and director Eric Red’s robust twist on the haunted house subgenre receives a most welcome reissue this week courtesy of High Fliers. Why the company haven’t gone all promo cray-cray and made a big deal out of such a thing is nothing short of obscene; further proof that this irresistible jolter is easily one of the great underappreciated gems of the last decade.

Like Red’s best work – from his intense power script trio of the original HITCHER, the moody vampire pic NEAR DARK, and the glossy thriller BLUE STEEL; to his directorial wham-bang double of COHEN & TATE and the awesomely bonkers BODY PARTS – the lip-smackingly gimmicky 100 FEET is another concentrated blast of slick entertainment. Though its high concept premise is full of implausibilities and lapses of its own internal logic – particularly when it involves the titular confinement distance – 100 Feet is a potent scare-show well worth its less than ten quid asking price.

It’s a pretty damn hard-hitting and thoughtful narrative, with Red concerned as much with the psychological repercussions of domestic abuse as he is with crafting an immensely effective supernatural horror movie. Throughout his career – be it as a filmmaker or, more recently, as a novelist – Red has excelled at creating complicated central protagonists and X-MEN’s Famke Janssen – herself no stranger to volatile spookies after her ill-fated sojourn in the HOUSE ON HAUNTED HILL (1999) – is tremendous as Marnie; her at once tough, vulnerable and feisty turn the perfect embodiment of Red’s beautifully written character arc.
The horror elements are adroitly handled, with both Janssen and Red never less than wholly convincing in their reaction to and use of fright tactics. Janssen’s fear and ultimate determination to rid her home, in every sense, of the looming spectre of her dead husband is palpable and powerful. And, though his more wonderfully outrageous and lurid tendencies are still there – as evidenced by 100 Feet’s gorgeously brutal bedroom assault set piece – Red this time shoots for mood and atmosphere, and is aided by some wonderfully hair-raising sound design and the rich, textured photography of Abel Ferrara regular Ken Kelsch.

Less successful though is co-star Bobby Cannavale (who, incidentally, appeared in the late Sidney Lumet’s short-lived, and similarly numerically titled, TV legal drama 100 CENTRE STREET) as the obsessive Detective Shanks. In the right hands, his interplay with Janssen could have made for stirring, dramatic stuff; sadly, Shanks sinks thanks to Cannavale’s overly shouty interpretation and – and perhaps worst of all – Red’s reluctance to flesh the part out beyond sloppy caricature. The rest of the film’s limited cast are, thankfully, more than serviceable, with GOSSIP GIRL’S Ed Westwick a likable – if, again, somewhat thinly drawn – toyboy love interest, and eighties heartthrob Michael Paré – an alum of Red’s nifty nineties werewolf shocker BAD MOON – a surprisingly formidable presence as Marnie’s vicious, ghostly husband.