As All Hallows Eve creeps closer and the dark nights draw in, it’s the perfect time to curl up on the sofa with a terrifying book or film. In the first part of this double feature are three – allegedly true – written accounts of hauntings that were the inspiration for popular horror films and franchises. As the saying goes, the book is always scarier than the film. 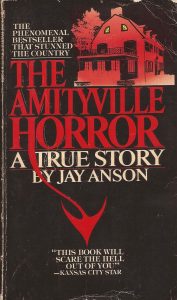 On 23 November 1974 in Amityville, New York, the DeFeo family – Ronald DeFeo Sr., his wife Louise, and their children Dawn, Allison, Marc and John Matthew – were murdered in their beds. All had been shot with a .35 caliber rifle. Ronald ‘Butch’ DeFeo Jr. – the eldest son and sole surviving family member – claimed that the family had connections to organised crime and that a hitman had committed the murders. Taken into police custody for security purposes, DeFeo Jr. confessed to the murders the following day – when his version of events leading up the discovery of the bodies didn’t make sense and his history of drug abuse became apparent.

On 21 November 1975, just over a year after the night of the murders, DeFeo Jr. was found guilty on six accounts of second-degree murder, receiving six consecutive sentences of twenty-five years to life. He remains in prison to this day, but has since claimed that he was not responsible for the deaths of his family, citing several stories that protest his innocence – one of which is that eighteen-year-old Dawn was the murderer and he killed her in self-defence. This of course is refuted by the evidence; for further details about the case, Gerard Sullivan and Harvey Aronson’s High Hopes: The Amityville Murders is a good place to start.

Shortly after the conviction, the Lutz family moved into the DeFeo’s former house, (ch)eerily named High Hopes. George and Kathy Lutz were unperturbed by the estate’s horrible history; they were enticed by the unusually affordable asking price for its size and location, which was lowered as a result of the murders and subsequent lack of interest from prospective buyers. Less than a month later, on 14 January 1975, the family fled the house with nothing but the clothes on their backs, claiming that demonic entities were trying to kill them.

A myriad of media interest followed when the Lutzes invited a local psychical research society and the infamous Ed and Lorraine Warren – a self-proclaimed demonologist and psychic, respectfully, as depicted in James Wan’s The Conjuring (2013) – to investigate the house. As a result, the Lutzes submitted recorded material to Prentice Hall publishers, which was then novelised by Jay Anson in his, now infamous, book: The Amityville Horror: A True Story from 1977. 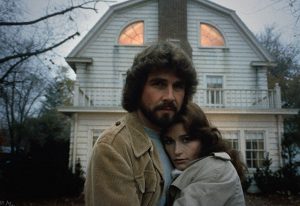 The book presents the Lutz family’s time in the house chronologically, from the initial move and blessing of the house – the only indication that the Lutzes seemed superstitious about the murders – to the eventual escape. The events of the haunting range from the mundane (missing money; locks that were tampered with; familial feuds) to the truly spectacular (Kathy levitating off the bed and turning into an old, toothless hag; green slime oozing from the walls; the sounds of a marching band; and a red eyed, demonic pig named Jodie befriended five-year-old Missy, leaving hoof tracks in the snow – even though no snow fell in the area during the time that the Lutzes occupied the house).

The book was a bestseller – it is estimated that, across the various editions, ten million copies have been sold – and was the basis for Stuart Rosenberg’s classic horror film adaptation in 1979, followed by an series of sequels, a remake, and several documentaries. The book has courted controversy since its release, notably calling into question the motive of the Lutzes. George was in serious debt, and faced losing his business. It has been suggested that the Lutzes, instead of losing the house through repossession, conjured a story of demonic possession and haunting to make as much money as they could from the resulting media storm. Such claims prompted the Lutzes to admit that several events in Anson’s book had been embellished upon or were fictional additions used to sensationalise the story. Despite this, the Lutzes never denied that they had experienced something in the house – they simply said that Anson had built upon their initial account to sell books. A quick read, it’s an exciting and gripping page turner – whatever you believe. 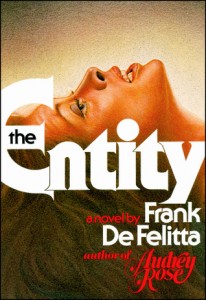 The Entity (1981) is a wonderful study in psychological and body horror, directed by Sidney J Furie, in which Carla Moran (Barbara Hershey) is terrorised and sexually attacked by an unseen entity. The film was based on the book of the same name from 1978. Written by Frank De Felitta – an author, producer, pilot and film director – it was based on allegedly true events occurring in 1974 in Culver City, California.

Dr Barry Taff, a psychophysiologist at the University of California, was approached by Doris Bither due to his interests in parapsychology. Bither claimed that her house was haunted by several figures, with one in particular names as Mr Whose-It by her adolescent daughter and three younger sons, who would physically attack and rape her. The children’s stories matched their mother’s descriptions and investigations proceeded, though Dr Taff maintained an air of scepticism after prolonged interviews with Bither, during which she revealed that she had suffered an abusive childhood. Taff was thus alerted to the possibility that the ghostly attacks were in fact a psychological manifestation of repressed abuse from Bither. If so the children, who would naturally believe what their mother was asserting, would then corroborate her claims of a haunting.

Despite this reservation, Taff and his team released photographs of supposed poltergeist activity, in which the entity manifested as energy or light. Bither, who realised through the investigation that she was unable to rid herself of the poltergeist, moved several times. With each relocation the attacks became less severe. Bither died in 1999, aged 58, of cardiopulmonary failure.

De Felitta’s script for the film, based on his own book, dramatised the dichotomy of the psychological against the scientific and is a fascinating exploration of female hysteria and gendered roles. For anyone who enjoyed the film, and whether you sit on the side of science or the spiritual, the book is a chilling, atmospheric read.

The Conjuring / The Perron Haunting. 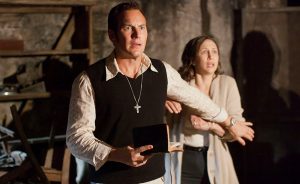 The Conjuring grossed over $318 million upon its release in 2013, from an initial budget of $20 million. Directed by James Wan, it was written by brothers Chad and Carey Hayes. The writing pair took inspiration from the alleged haunting of the Perron family in Harrisville, Rhode Island in the 1970s, shortly after they moved into a beautiful, spacious farmhouse. Known as the Old Arnold Estate, the land was over 200 acres in size and the farmhouse was erected in 1736.

The Perron family consisted of Roger and Carolyn Perron, and their five daughters: Andrea, Nancy, Christine, Cindy and April. Despite the film proclaiming that it was based on the case files of Ed and Lorraine Warren, the most detailed account of the haunting comes from eldest daughter Andrea, in her trilogy, House of Darkness, House of Light: The True Story (volumes one, two and three). The books detail the family’s claims that the farmhouse was infested with ghosts; spiritual activity ranged from helpful assistance with cleaning chores, to disembodied wailing and messages, and even insinuations of sexual attacks.

One of the most notorious spirits was that of Bathsheba Sherman, who was accused of practising Satanism and murdering her own baby in his name. Described as a foul looking woman, she was said to be abusive to staff in her home and that her remaining children all died before the age of four. Sherman herself died in 1885, supposedly found hanging from a tree on the property after cursing all who dared to inhabit the land that she considered rightfully hers. 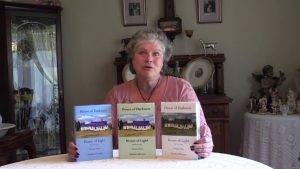 Andrea’s books describe how her mother was the target of this otherworldly activity and how the attacks developed into more dangerous territory; from terrifying apparitions with dire warnings, instructing Carolyn to leave to leave the property, to physical attacks that began as slaps and led to Carolyn being stabbed in the leg. Finally, Bathsheba attempted to take full control of Carolyn, by possessing her.

Enter the Warrens. Supposedly, during an exorcism that was condoned by the Vatican, Ed and Lorraine Warren were unable to fully banish the spirit of Bathsheba. Though Andrea reports a demonic voice emerging from her mother, who was also thrown around the room by her ghostly attacker, the books deviate from the somewhat happy ending of the film, in which the Warrens save the day. According to Andrea, Roger Perron demanded that the Warrens leave the premises, as their presence only exacerbated the ghostly activity. The family followed suit in 1980 when they could no longer persevere with the hauntings, as financial constraints had forced them to stay on the property up to that point. The Perrons moved to Georgia and reported no further ghostly activity.

Andrea Perron’s trilogy has been criticised for its lengthy and somewhat rudimentary attention to unnecessary detail, delivered with a noticeable lack of punctuation and grammar. Still, for anyone interested in reviewing supernatural ‘source’ material, it is a must.